Truths behind the genius that is ‘Yes Minister’

Having been a long-term, obsessive devotee of Yes (Prime) Minister, I enjoyed picking up this little dip-in fan’s miscellany about the series, not least because of the Jay & Lynn introduction. Here are a few treats:

The fruits of authenticity

[The] quest for authenticity produced unexpected benefits. We discovered that truth was not just stranger than fiction, it was also funnier. We often found that if an episode wasn’t really working, the answer was to go back to our expert advisors and probe a bit further; time and again this would produce the idea that we needed.

There were three plot ideas in particular that we hit on in this way. There was a crisis meeting in the minister’s sleeping compartment in the overnight train to the party conference. There was the announcement on television of a Christmas benefit for pensioners after the civil service had refused on the grounds of administrative impossibility, and there was the teetotal reception in an Islamic country where the UK delegation set up an emergency communications tent full of bottles of Scotch to top up the chaste orange juice supplied by their hosts. They all happened, but we would never have thought of them ourselves. (p3)

The blindness of self-perception 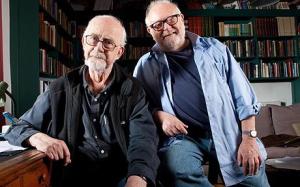 Of its time but ahead of its time

Yes Minister and Yes Prime Minister ran from 1980 to 1988, but it was never about the 1980s. It was devised in the 1970s and reflected the media-obsessed politics of the Wilson/Heath/Callaghan years, not the conviction politics of Margaret Thatcher. Curiously, it was much closer to the politics of the years after it ended – the years of Major, Blair and Brown. (p5)

Incidentally, their comments elsewhere in the introduction about the series’ unexpected global appeal are spot on. When we lived in Uganda, one of the things I quickly discovered was that my Uganda boss and I shared a passion with the world of Hacker, Appleby and Woolley.