Václav Havel’s 1978 warning to the West

I’m trying to understand power – what it means, how it’s wielded, how it affects us. Big topic. But I’m increasingly convinced that we can’t understand the culture of suspicion without grasping the power of power (and its abuses).

This has drawn me to someone who has been a bit of a hero, but whose writings I’d only dipped into. Reading Václav Havel‘s masterly and vital 1978 essay The Power of the Powerless has blown me away. Written in the dark days of Czechoslovak communism (only 10 years after the false dawn of the Prague Spring), it is a profound analysis of what it was like to live under a regime built entirely on lies. The only response, the only subversion of the regime, therefore, is to live in truth.

I’ll probably come back to it again at some point. But I just wanted to quote three sections, because i do think they have a bearing on us today in the West. In fact, Havel goes as far as to direct his warnings to us. For while we might not live in world of secret police, informers and the iron will of ‘the party’, concepts of the modern state are built on the same modernist foundations. I just wonder if Havel has a prescient, prophetic even, word for us here. 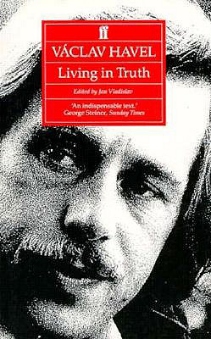 First of all, he offers a searing analysis of the credibility gap between reality and propaganda.

The post-totalitarian system touches people at every step, but it does so with its ideological gloves on. This is why life int he system is so thoroughly permeated with hypocrisy and lies: government by bureaucracy is called popular government; the working class is enslaved in the name of the working class; the complete degradation of the individual is presented as his or her ultimate liberation; depriving people of information is called making it available; the use of power to manipulate is called the public control of power, and the arbitrary abuse of power is called observing the legal code; the repression of culture is called its development; the expansion of imperial influence is presented as support for the oppressed; the lack fo free expression becomes the highest form of freedom; farcical elections become the highest form of democracy; banning independent thought becomes the most scientific of worldviews; military occupation becomes fraternal assistance. Because the regime is captive to its own lies, it must falsify everything. It falsifies the past. It falsifies the present, and it falsifies statistics. It pretends not to possess an omnipotent and unprincipled police apparatus. It pretends to respect human rights. It pretends to persecute no one. It pretends to fear nothing. It pretends to pretend nothing.

Individuals need not believe all these mystifications, but they must behave as though they did, or they must at least tolerate them in silence, or get along well with those who work with them. For this reason, however, they must live within a lie. They need not accept the lie. It is enough for them to have accepted their life with it and in it. For by this very fact, individuals confirm the system, fulfil the system, make the system, are the system. (p44-5)

To avoid living within a lie, it is necessary to live in truth and to speak with truth.

In the post-totalitarian system, therefore, living within the truth has more than a mere existential dimension (returning humanity to its inherent nature), or a noetic dimension( revealing reality as it is), or a moral dimension (setting an example for others). It also has an unambiguous political dimension. If the main pillar of the system is living a lie, then it is not surprising that the fundamental threat to it is living the truth. This is why it must be suppressed more severely than anything else. (p56)

So here is the warning.

And in the end, is not the greyness and the emptiness of life in the post-totalitarian system only an inflated caricature of modern life in general? And do we not in fact stand (although in the external measures of civilization, we are far behind) as a kind of warning to the west, revealing its own latent tendencies. (p54)

Could he be onto something here? How difficult is truth-telling and living in 21st Century Britain?