The Uncertainties of Contingency: What if Franz Ferdinand didn’t die in 1914?

I have stood at the very spot where Archduke Franz Ferdinand and his wife Sophie were shot by Gavrilo Princip 100 years ago. And the impossible “What If” question occurred to me even then. So when I noticed that eminent historian Ned Lebow had published an examination of the issue, I leapt at it. The assassination was such a fluke, so preventable, so absurd that the yearning for a different outcome of that moment is great. As he says at the start (having summarised some of the counterfactual options),

None of these what-ifs strains our understanding of the world because most royal processions do not stray from their intended routes, and most security details would have rushed the archduke and his wife to safety at the first signs of violence. In this instance, the so-called factual, not the counterfactual, is what strikes us as unrealistic and incredible. (p16) 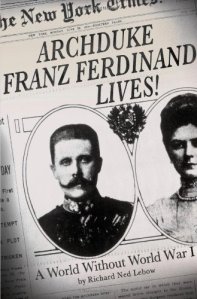 Lebow’s shrewd strategy here is to avoid offering definitive counterfactuals, and instead presents a number of different options, loosely grouped under the headings of Best Plausible World and Worst Plausible World. He constructs both these poles on the assumption that the First World War doesn’t happen, or at least certainly not in the same way. His contention is that the only country seeking war in 1914 was Germany, quoting the 1910 German foreign minister Alfred von Kiderlen-Wächter as rightly observing, “If we do not conjure up a war into being, certainly no one else will do so.” (p18). He suggests that there was a 3-year window from 1914 for the possibility of a war if the archduke survives. It becomes increasingly unlikely after 1917, and before then, would have required “another acute crisis and equally irresponsible behaviour by the great powers.” (p218)

In the best plausible world

some fascinating consequences are suggested: there is a revolution in Russia of sorts, but the Bolsheviks don’t eventually win, the British Empire survives the 20th Century (with India having become a Dominion rather than gaining independence), America is one of a handful of global powers (rather than ending the century as superpower). German becomes a global lingua franca, alongside English and others. But interestingly, the cause of civil rights, fighting anti-Semitism and other social issues are not as developed in this counterfactual as they actually were. And in the arts world, America does not enjoy the fruit of the 100s of talented people fleeing Nazi Germany (because without the grievances of Versailles and sling a war, history offers Hitler no rallying points). Many stay in Europe, opting for the mildly less autocratic world of Britain (at least when compared to the surviving German and Austro-Hungarian empires).

In the worst plausible world

Franz Ferdinand and Sophie embark on their final journey

This is truly chilling. Germany eventually gets the atomic bomb, and so does Britain. Both societies develop what Lebow describes as “fear-based political cultures reminiscent of George Orwell’s 1984.” Interestingly, Henry Kissinger never leaves Bavaria (his family fled the Nazis in 1938, settling in the US) but grows up to exploit his great talents in German politics. His application of realpolitik, for example, has disastrous consequences. But various miscalculations and missteps by European leaders result in the tragedy of a nuclear war with London and Berlin and other cities being completely obliterated. There are other aspects of this world that are grim – in common with the best plausible, it never experiences civil rights improvements.

In fact, one of his most striking, if provocative, insights is that the only place in the factual world that is better off without the First World War is America. The 1WW and 2WW damaged America the least (of all the combatants), its economy boomed after the 2WW and it ended the 20th Century, as said, as sole superpower. In both best and worst plausible suggestions, it comes out with nothing like this dominance.

Some fun amidst it all

Obviously this is all conjecture, but it is educated. What makes it so enjoyable is the occasional flights of fantasy that he indulges in. Some of my favourites were:

So History really is bunk then…?

But one of the key lessons of the book seems to be that because so much of history depends on flukes, contingencies and human incompetence, we are inescapably stranded in our present. We can’t truly learn lessons from the past (because it contains so few total inevitabilities) and as a corollary, we can’t play pundit or prophet (because events hardly ever proceed in linear fashion). An hilarious example comes from nineteenth century transport planners in New York city, concerned about the rise in horse-drawn traffic in Manhattan. They feared that if the growth trends persisted, by 1950 populated parts of the centre would be under 6 feet of manure. The problem was that “They failed to consider the possibility that other means of transportation, notably, the automobile, would supplant the horse. And within a few years of this dire prediction, horses began to disappear from city streets.” (p205)

This investigation of the past should teach us to be wary about predictions. They are generally linear and fail to take into account system-lived effects, confluences, or events that bring about major transformations. Linear projections rest on the assumption that the future will be more or less like the present and that we know why the present is the way it is. our understanding of the present is based on our understanding of the past, and that, I have shown, rests on the belief that past events were overdetermined. After all, nobody would draw universal lessons from events they recognise to be highly contingent. The more we use counterfactuals to unpack history and reveal its contingency, the more we see the fallacy in drawing lessons from these events. Many of our assumptions and theories about international relations come from the putative lessons of World War I and II. These lessons rest on the untested – and generally unsupportable – assumption that these events are general, not unique, overdetermined, and not highly contingent. Caveat emptor! (p238)

One can’t help wonder why history is done at all. After all, Lebow has dedicated his life’s work to its pursuit. But at the very least, his is a salutary warning for analysts and pundits alike. And for laymen like myself at least, his suggestions make a lot of sense. I guess this study merely serves to underscore how mesmerisingly complex and intertwined human affairs really are. It is a fascinating book – I loved it and highly recommend it (despite being ridiculously expensive at the moment).

Which makes the ancient longing for wisdom, rather than mere knowledge, in the face of dilemmas and complexities all the more vital and relevant. We are truly put in our place by history. But we’re never completely adrift if we have gained wisdom. As one writer Paul Miller comments in his very helpful A Praying Life:

Reinhold Niebuhr, a leading post-World War II theologian, put his finger on the problem: “The human ego assumes its self-sufficiency and self-mastery and imagines itself secure… It does not recognise the contingent and dependent character of its life and believes itself to be the author of its own existence.” We don’t like being contingent, completely dependent on another. That little child Jesus urged us to become is completely dependent on its parents for everything. (A Praying Life, 125)

A godless universe is frightening in large part because of this contingency. But if it is a created order (in the Christian claim), however complex or confusing it remains, there is a personal providence to trust beyond it all. This is not an incompatible belief – even if, to us at times, it can seem incomprehensible.