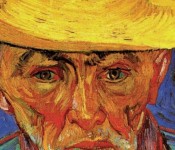 I touched on the surprisingly physical reality of the black dog yesterday. It’s surprising, because, of course, depression is as much about emotional pain and scars as anything else. But here’s the really weird thing: the emotional anguish actually feels physical at times. I think I really get now why people talk about feeling heart-sick. It is a piercing constant, perhaps a little like having emotional toothache.

My grandfather had to have some of his leg amputated. I don’t remember much about it, apart from the fact of it. I was only 11 when he died. But I do remember being told about the phantom pains which really troubled him. And yet there was nothing there. It was all in the mind. But it was nevertheless very very real – but not treatable with regular pain-management. Isn’t the human body an extraordinary thing?

I wonder sometimes if that might be a useful analogy. Phantom pains have roots in genuine experiences (eg trauma). They are invisible so have nothing to show for it. They are all ‘in the mind’. But – here’s the point – they are real. agonizingly real. And often, it leads to all-too-visible tears.

So what are some of these emotional pains? As I’ve already said, we’re all different. And the causes and complexities are myriad. But from my last decade, and from what I’ve read, here are some of the more common ones.

Yep. This is one of the biggies. And no, I’m not going to just psychobabble personal guilt away. I know full well that because none of us is perfect, we ALL have cupboards-full of skeletons. And I know that even in recent months and weeks, I have thought, said, and done things I really shouldn’t have. And I am responsible for them all. We can’t just shake that off because we’re in pain.

BUT, I can certainly tell you this. Depression sure has made living rightly HARDER. That’s something I wish some individuals could just take into account every now and then. After all, don’t you feel like snapping when you’ve got a toothache? Or when you’re drowning, don’t you imagine latching onto anything you think might help?

But the trickiest thing here is that false or catastrophized guilt (if I can put it like that) is one of the worst things about the Black Dog. He is satanic in that respect, by which I mean, ‘accusatory’ (the true meaning of the word). It can be a daily – hourly even – battle. To feel the weight of having screwed everything and everyone up. I detest the way my state of mind detrimentally impacts those closest to me, the people I love and who love me. I hate it.

I’m therefore acutely sensitive to suggestions others might make. And the black dog doesn’t let you distinguish between true and false guilt. So… if you there is a right moment for challenging someone in this state, make sure you do it… very, very gently. It’s not simply going to be a matter of offering one positive to counterbalance the negative. I’m sorry. But the black dog deafens one to any positives at all. Which is why a negative can tip you right over the edge…

I vividly remember when I realised it. During my sabbatical in 2013, I had a week in former East Berlin to do some research for my Wilderness of Mirrors book. I loved being there – a real buzz for any Cold War nut. But for absolutely no apparent reason, as I stepped off one of the old trams onto a snow-covered pavement, I suddenly felt drowned in shame. It was so odd and I was quite unprepared for it. But I knew exactly what it was.

Someone (I forget who) helpfully distinguished between guilt and shame like this. Guilt is knowing, or thinking I know, that something I did (X or Y) is wrong. Shame is the overwhelming sense that I’m the kind of person who does X or Y. So do you see? Being reassured of forgiveness for X or Y is utterly immaterial (important and good though that is). Because it doesn’t change the simple fact that I’m that sort of guy. An adjective (describing an action or temptation) gets transmuted into a noun (whereby I AM that person – thief, liar, hater, LOSER). Shame is about my identity. It’s about WHO I AM. Could this be one reason it’s so difficult for men in particular to talk about this stuff? Women are more likely to get the black dog than men; but men are more likely to take their own lives if they get it. Because in contemporary culture, men have little help in finding, let alone discussing, identity issues.

Forgiveness is no answer for shame therefore. Only one thing can be… GRACE: to be known fully AND still loved. But even then, it can feel unbearable… because of the shame. You see, it’s not even just a matter of pride (how often do I hear that as a catch-all pastoral diagnosis – of course it may well be – but it’s also a crude justification for not listening carefully – talk about sledgehammers to crack nuts). Shame goes to the heart of identity fracture. So in fact, one of the reasons that I cling on to being Christian (just) is that identity in Christ is so central.

But that’s only when I’m thinking straight.

When I’m not thinking straight, I get sucked deeper into the cave… From shame, I slide into worthlessness. And very little dissuades me of that thought. A cave is an important analogy here. It is dark, dank, cold… lonely. Friends and loved ones who’ve not experienced the dog seem outside the cave. But their voices seem muffled and distant – they somehow can’t connect with what it’s like inside. Sometimes, in the darkest of the hours, it’s even hard to make out any of their individual words. It’s just a noise outside the windows, drowned out by the blizzard. Except, this time, the blizzard is inside the cave. Does that make any sense? No. Of course it doesn’t.

And so, one descends. Freefall at times.

It’s not logical. It’s not rational. It’s not always consistent, or even describable. You see, sometimes, even the act of choosing words to describe the cave feels like an act of vandalism. They never do justice to it. They always minimise it. So silence is preferable – as if to guard against that utterly damning response, “Oh well, then – if that’s all it is, what’s the matter then… It can’t be that bad.”

But I’m afraid there still need to be a few more parts to come: where the feelings lead; where/how God might fit in; how non-troglodytes (cave-dwellers!) might help (or not); some books to read… See you next time… (if you can face it).