Spandau Tales and Observations from the Nuremberg War Trials 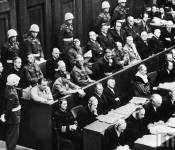 Tales from Spandau didn’t quite match the expectations I had of it from various reviews. I felt that what it set out to do could have been dealt with in perhaps half the space. Nevertheless, it is grimly fascinating to read of the Cold War shenanigans that went on account of the 7 Nazi War criminals imprisoned at Spandau.

Few expected any of those indicted at Nuremberg to get away with anything less than the death penalty. So it came as rather a shock that 7 were given extended prison sentences, a fact that none of the 4 Allied Commands were prepared for.

The terms of the agreement under which Spandau (in the British sector of Berlin) was set up as their place of incarceration was rushed and had all kinds of unexpected consequences as the Cold War got colder. The Soviets had perhaps the greatest cause to feel bitter about the Nazis (after the huge scale of the destruction wreaked on the Eastern Front) but also constantly suspected that the West was soft of Fascism. So they were never in the mood for humanitarian concerns over the treatment of indicted war criminals who really should have been executed. This lead to some rather surreal arguments with the 3 western powers as the decades went on (and bizarre circumstances: at Alcatraz prison the guard-prison ratio was 1:1.8, at Spandau it was 25:1!!).

Anyway, here are a couple of powerful excerpts

For many, the punishment is irrelevant. Italian Jewish leader Tullia Zevi said of  the 1996 trial of SS-Hauptsturmführer Erich Priebke, who had been extradited from Argentina at age 82 to stand trial for helping to direct the infamous Ardeatine Caves massacre of 335 men and boys near Rome, ‘The verdict is in some ways irrelevant… What is important is the trial… What do i care if Priebke ends up under house arrest, or in prison for life?” For others, the punishment can never fit the crime anyway. If a common murderer is executed, then what of the man who ordered the deaths of thousands or even millions? Arendt wrote during the Nuremberg trial that “for these crimes, no punishment is severe enough… [Their] guilt shatters any and all legal systems.” Despite what he once said over lunch at Nuremberg, Hermann Goring could not really die ten deaths. And if hanging a man convicted of crimes against humanity pales in comparison to the crimes themselves, then a prison sentence may fall far shorter of the mark. (p8) 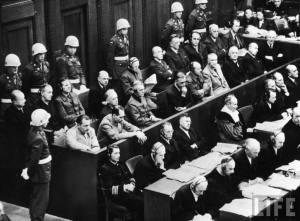 One of those imprisoned was Erich Raeder who had been naval commander-in-chief inherited by Hitler, but who remained in position until 1943. He managed to put up some defence – but was a classic example of not being able to deny guilt as one just following orders.

Despite his propensity to cite defense needs to justify treaty violations and wartime needs to justify legal violations, Raeder’s guilt was not difficult to prove. Sir David Maxwell-Fyfe exposed most violations of the Versailles and Anglo-German Naval Treaties. “For 20 years, from 1918 to 1938, you and the German Navy had been involved in a course of complete, cold and deliberate deception of your treaty obligations… Do you deny that this is so?” Raeder could only counter that “It was not cold-blooded affair.” Maxwell-Fyfe made hay of Raeder’s comments concerning war planning at the Hossbach meeting or at later talks in May and November 1939 with high-ranking officers. But the invasion of Norway was the most salient issue. In November 1945, the prosecution had pointed out that ‘the Norwegian invasion is … not a typical Nazi aggression in that Hitler had to be persuaded to embark on it. The chief instruments of persuasion were Raeder and [Alfred] Rosenberg; Raeder because he thought Norway strategically important and because he coveted glory for the Navy.” US prosecutor Telford Taylor added that, in cases against Raeder and other senior officers, following orders as technicians of policy was no defense anyway. “It is an innocent and respectable business to be a locksmith,” Taylor noted, “but it is nonetheless a crime if the locksmith turns his talents to picking the locks of neighbours and looting their homes.” (p138)